Home Exhibition Taras and Vatl at MArTA of Taranto

Exhibition Taras and Vatl at MArTA of Taranto 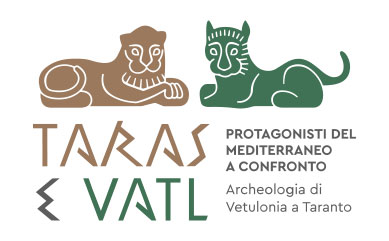 In 2021, two giants of ancient Italy, the Spartan colony of Taras-Taranto and Vatl-Vetulonia, the famous city of the Etruscan Dodecapolis, are the focus of a cultural event consisting of two exhibitions (one at the Civic Archaeological Museum in Vetulonia and the other at the National Archaeological Museum of Taranto) and an international conference in Taranto.

In addition to demonstrating the fruitful cooperation between the two archaeological museums, the project is the expression of a desire to establish a solid interaction between distinct regional situations by examining the dialogue between two ancient civilisations, that of Etruria and that of Magna Graecia, which was historically projected into the Mediterranean basin.

A unique event, played out in three acts, at the centre of which are two cities whose destinies, from the very beginning, were closely tied to the sea, as reflected in their mythology and the symbolic imagery of their figurative art. Indeed, images and artefacts were the expression of values and messages that were carried on the sea to other lands, acquiring meanings and speaking a language that was clear to both of these two cultures. The strong affinities between them were thus reflected in manifestations of artistic handicraft, including an absolutely extraordinary use of gold.

SECTION I:
Tumulus of Poggio Pelliccia

The first section of the Taranto exhibition is the presentation of the tumulus of Poggio Pelliccia, a monumental funerary complex in the territory of Vetulonia. The life-size reconstruction of the chamber and a large part of the dromos (the access corridor) is presented for the first time. This approach is justified by the wide variety of objects deposed in the tomb, which despite being extensively looted has yielded materials in sufficient quantities to enable an understanding of the wealth attained by the local elites between the Orientalising period and the Classical period (7th-5th centuries BC).

Lion in faïence from an infant burial in the area of the Arsenale Militare in Taranto. National Archaeological Museum of Taranto – MArTA(ph. by M. Gallandra)

SECTION II:
The funerary customs and material culture of Taranto

The second section illustrates the funerary customs and material culture of Taranto in the same time frame in which the tomb of Poggio Pelliccia was in use. The display of grave goods from the urban necropolises, selected from the Museum’s storage facilities, demonstrates the extent of the network of cultural and commercial relations of which the Spartan colony was a part. This network connected settlements and civilisations across the Mediterranean, including Etruria.