Home Objects on Display Metope of the Naiskos

Metope of the Naiskos

The entire space of the metope is occupied by a fighting scene. A man on horseback, dressed in armour, is about to deliver the coup de grace on an almost helpless enemy reclining on the ground. The latter, who is naked and characterized by powerful muscles, is armed with a sword and an oval shield. The composition of the relief is strongly influenced by an illustrious antecedent, namely the bronze group sculpture created by the sculptor Lysippus for the city of Dion, where, in the midst of the fallen of the Battle of the Granicus of 334 B.C. between Macedonians and Persians, Alexander rides Bucephalus and is about to kill an enemy.

The relief is part of the decoration of the most important Hellenistic sepulchral monument found in Taranto, the naiskos of via Umbria. The Hellenistic tombs, between the end of the 4th century and the 2nd century B.C., were composed of a hypogeum containing the burial chamber which could accommodate one or more bodies. In many cases, above ground, the presence of these tombs is signaled by aedicules. The latter have usually been reconstructed also thanks to the aid of the drawings found on vases. The aedicule is a structure composed of a cubic-shaped base, adorned with metopes, surmounted by columns supporting a pediment. A statue or vase would be placed inside the aedicule. A series of mostly well-preserved metopes, some capitals and the top pediment are part of the decoration of the naiskos of Via Umbria. 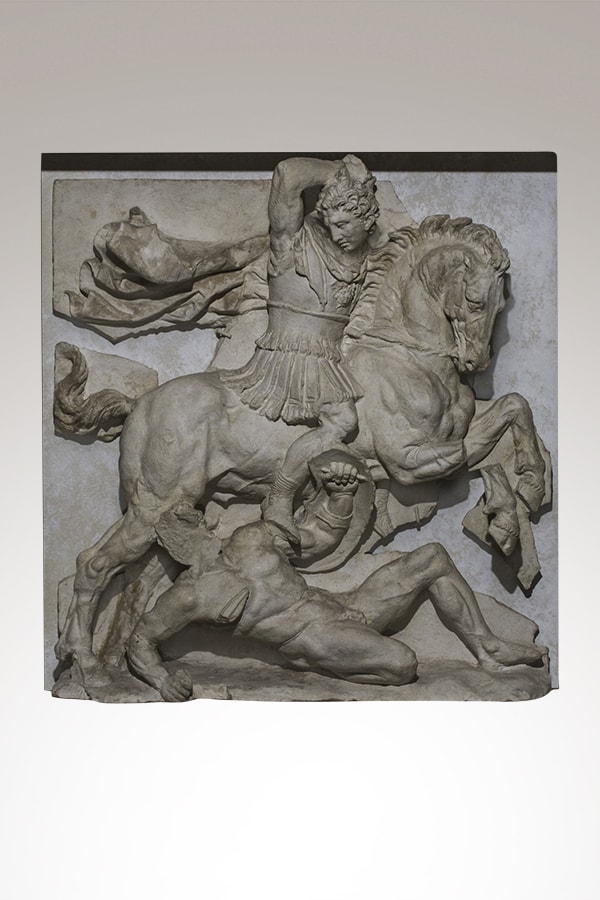