Home Objects on Display Panathenaic amphoras from the Athlete of Taranto

Panathenaic amphoras from the Athlete of Taranto

Fragments of four large amphorae decorated with black-figures were found at the outer corners of the sarcophagus of the Athlete from Taranto. Three amphorae have been put back together, while the fourth has been almost entirely lost due to the insertion of a grave in the southwest corner of the burial ground.

These vases belong to a particular type of amphora, produced starting from the mid-6th century B.C. and linked to a very specific occasion: indeed their name – Panathenaic amphorae – refers to the festival of the Great Panathenaea, which was celebrated in Athens every fourth year in honour of Athena, the patron goddess of the city. On one side of the amphora is the armed goddess in the guise of Promachos (fighter), between two columns flanked by a Greek inscription indicating that they belonged to the “Athens games”. These amphorae, containing the precious oil obtained from the pressing of olives from the trees sacred to the goddess Athena, were in fact given as prizes to the winners of the athletic competition of the Great Panathenaea, whose specialties are illustrated on the other side of each vase.

The amphorae of the Athlete from Taranto depict the race with quadrigas, boxing scenes and two disciplines that are part of the pentathlon: long jump and discus throwing. These festivals attracted athletes from all over the world of Greek language and culture, including the anonymous Taranto aristocrat buried in Via Genova, who achieved glory by excelling in various specialties. 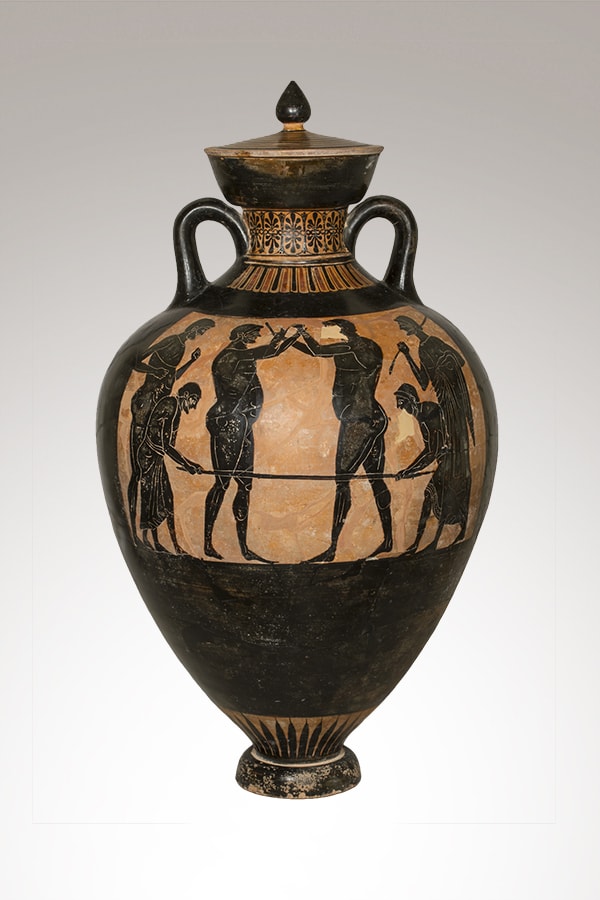