Found in 1961 in Ugento, a town of ancient Messapia, during an extension project on a private house, the bronze statue represents Zeus in the act of hurling a lightning bolt (lost) with his right hand, while on his left arm are the claws of an eagle that has not been found. The god is wearing two crowns: a circular diadem decorated with rosettes and a laurel crown.

The 74 cm high statue was originally positioned on a column in the open in a sacred area where there were no monumental buildings as was typical of Messapian shrines. What remains of the supporting column is the large Doric capital in Lecce stone, whose side is equal to the height of the statue and decorated on the abacus with a frieze of rosettes similar to the ones on the god’s diadem. The capital was placed upside down to seal the cavity in which the statue had been ritually deposited, perhaps to preserve it from some unidentified danger.

A masterpiece of the late-archaic bronze production made with the lost-wax casting technique, the Zeus from Ugento may probably be attributed to a Taranto workshop, testifying to the intense contacts that had been established between the inhabitants of the Spartan colony and the indigenous peoples of the Salento area when they were not, at times even fiercely, fighting against each other. 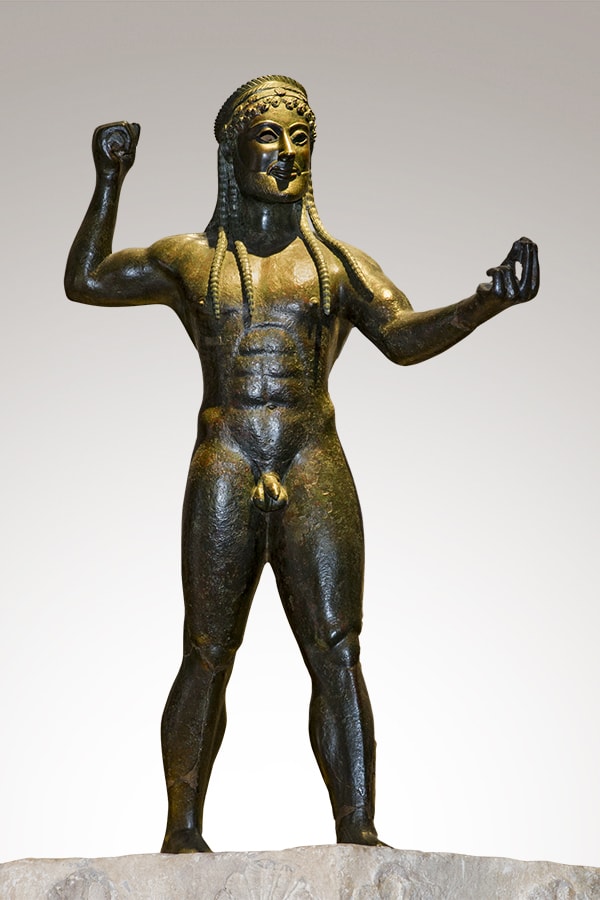